So much has happened the last month, I hardly know where to start. I've had some very interesting energy work done, including shamanic work, qigong and empathic resonance healing. (For full details on any of these, check my November post with a similar title). What I discovered was that my lower 3 chakras were mostly closed, creating a blocked flow of energy from my diaphragm to my root chakra. This helps explain the tight constriction in my breathing and my digestive issues. I also had pinched off my energy flow through my neck while attempting to ignore my feelings. I would experience them in my body and not allow them to rise into my consciousness. My whole life has been about deciding how I "should" feel and convincing myself that anything outside that ideal didn't really exist.

This phenomena was most apparent when I had an intense constriction in my throat one night. I felt like I was being strangled. I started to cry and allowed myself to actually acknowledge what I felt, even though it wasn't how I wanted to feel. Immediately my throat opened up. A new discovery! Not only was my throat constriction and loss of voice due to not speaking from a place of authenticity, but it was from the denial of my true emotions. I had chopped myself in half in more than one way. Like a pumpkin pie cut into 4 pieces, I had the female and male (Yin and Yang) and my emotions and mind. I had somehow thrown out half the pie in an attempt to make myself more perfect! What a waste my emotions and womanhood are when they rot in the trash.

On January 28th, I was having a qigong session and Claudia found that my Earth Soul had fractured off about a year after Luke's death (which was when I tried to start dating again). The Earth Soul rules the Spleen and Stomach, which means digestion, as well as the ability to nurture and connect with nature. No wonder I had no desire for children or animals and had quit working outdoor education at that exact time. Since then, my digestion has improved, all I want to do is wander around the wilderness and have been drawn to animals and small children. Coincidence?

Immediately after this healing session, I put myself on a 3 day silent retreat. My parents were in Florida (I bailed at the last second due to poorer than usual health) and I had 14 friends on emergency stand-by in case I "crashed". I felt better every day during the week and decided to end with silence, no computer and no cell phone activity. During this time I read every journal I've written since 1996 and looked at corresponding photos. My idea was that emotions I hadn't allowed myself to feel during those time periods would resurface so I could let them go for good.

Prepared for an emotional roller-coaster, I parked my ass on the well worn corduroy couch. My first journal was mostly poetry from my freshman year at Principia College and it was wild! Despite being totally sober, my poetry was alive and psychedelic, jumping off the pages in delight. I was so free and creative, vibrant and unique. Then I had my first real heart break…a little wall was built…like the ones we'd construct to have snowball fights. I laughed out loud more than once at my ex-boyfriend bashing poems.

As I waded through my past, I saw the same patterns wearing creek beds over the desert of my interior. I was so passionate, always seeking pleasure, intimacy, and union with others. Always running away from myself. With each break up, the wall got higher until I couldn't see over it, or even escape my fortress. I became jaded, bitter, angry and emotionally distant until I was unable to open up and truly love. After Luke died, I wanted to get married, but couldn't open myself to a partnership despite my attempts.

At the end of my retreat, I had accepted myself more and felt better than ever. I had energy, enthusiasm and creativity at my fingertips. The universe had gifted me 3 days of warm sunshine and long hikes. I was excited to see my parents and share my discoveries. 10 minutes after they got home, my energy drained like I was a sieve. What the fuck? Am I supposed to be a hermit in the woods for the rest of this life? Apparently I was unable to digest human energy as well as food. This was going to take some work. Good thing I have all the time in the world...
Posted by KiraZoe at 8:22 PM 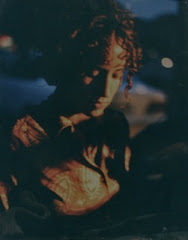